A Website without CDN Network: As everyone knows in a most common typical simplest scenario, you will have a website hosted in a web-server. In most common cases a typical small website will be hosted in some web-server, provided by web-hosting service provider. And the website DNS domain name points to this hosting web-server. In a simple scenario like this when the user requests the pages (or in general we can say any content such as text pages, images, and other media), the end-user’s browser request reaches this web-server, and the web-server delivers the web-pages via HTTP Protocol. 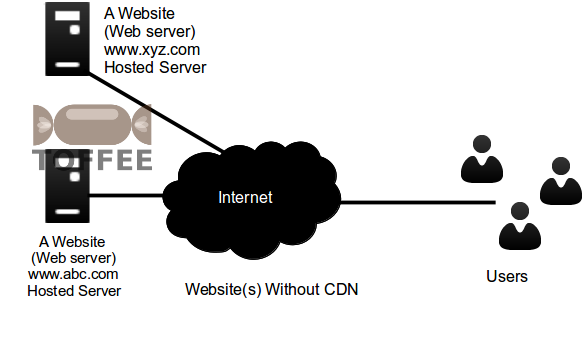 Local user Browser Cache: The process of page or content download is pretty straight forward in a web-browser. A web-browser will have a small local cache. So that if there is any future repetitive requests, instead each time fetching from the main website (web-server), the browser will load/render the pre-cached content directly in the browser interface if it finds that specific content already once stored earlier in its cache. This saves up a lot of traffic. Since most of the times any website will have a lot of common content, such as logos, some Java scripts, CSS Stylesheets and so on. But the only drawback is that if there is a small organization, then each user have to access the content atleast once, so that they get their browser cache stored with content. In this case it is a highly discrete or non-shared cache platform/scenario.

Local web Proxy/Caching Servers: So in a office, or any such setup, where there are N users accessing common Internet resource, we can deploy a common web proxy or caching server(s). These servers (or a server) will create a great opportunity of creating a localized common caching scenario. So in this mode assume if one user accesses a website for first time, assume few of its contents are cached in this caching server, then later that day whichever other user accesses the same content, they may receive cached content from this central caching/proxy server. This is a huge advantage. Once the cache is mature and holds enough cached contents, it will sometimes exponentially reduce the network load, and downloading repetitive data from Internet (or any network in general).

A Website via CDN Network: In this scenario, the main basic website acts much like a source or origin. It will contain the web-content but it will not serve the real end-users. Instead there is going to be a CDN Service provider, and his vast infrastructure with several distributed, so called CDN Nodes across Internet spread globally. When the end-user requests the website, it is these CDN caching nodes will actually server the content to the end users. The job of the CDN service provider is to provide a highly redundant load-sharing along with transparent/abstract infrastructure. The CDN provider will often point or assign a CDN node which is least used at that instance, also sometimes assigns dynamically a CDN Node which is geographically nearer to the end-user. Hence this reduces the download time, since it reduces the number of router hops in internet. 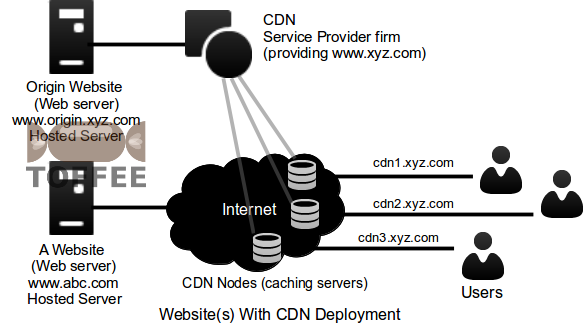 A CDN Node is often a highly proprietary caching resource installed by the CDN Service provider, where when it gets a request of a content to be served from end-user browsers, it caches the pages/content from its neighboring CDN Nodes, or sometimes directly from the origin web-servers. So this will exponentially reduces the load on the origin webserver. It is like with CDN server, the load on the origin webserver is or can be reduced upto 70-80% or sometimes even more depending on the content nature and depending on static vs. dynamic content it has.

So this is how a basic CDN works, its significance and value addition for any website if it is served to users via CDN, versus served directly via single webserver (or just few redundant web-servers) without a CDN.

Apart from this there are various advantages in using a CDN within your deployments. To know more about CDN Advantages kindly read the full detailed article HERE.

Introducing TrueBench - a high resolution CPU benchmarking system ↗
Saturday' 13-Mar-2021
TrueBench is an unique open-source benchmarking system in which the core system performance and efficiency parameters are measured at extreme high resolution in the order of several million/billion µ-seconds for a given specific task. TrueBench is a part of The TOFFEE Project research. With TrueBench Raspberry Pi 3, Raspberry Pi 2B, Raspberry Pi 2 and other embedded SoC devices are benchmarked and you can do a comparative analysis with standard mainstream x86 devices.
Watch on Youtube - [184//1] 306 - Introducing TOFFEE-Fudge - Network Packet Generator ↗

My Lab Battery Purchase and Service logs for Research ↗
Saturday' 13-Mar-2021
Here is a complete log of my lab battery purchase, service record which I maintain in Google drive. These I use for my home (or my family generic use) as well as a part of my home lab. I maintain a detailed log this way to monitor the failure rate of these batteries. This will allow me to select a specific brand/model which has higher success rate and to monitor any premature failure/expiry. The service log helps me to monitor and schedule the next service routine so that I can maintain these batteries in tip-top condition.

Network Packet Queue or Buffer - Packet Flow Control, Fragmentation and MTU ↗
Saturday' 13-Mar-2021
Network Packet Queue or Buffer - Packet Flow Control, Fragmentation and MTU
Advantages of CDN - Content Delivery Networks or Content Distribution Networks ↗
Saturday' 13-Mar-2021
Building my own CDN - choosing a web-hosting to deploy my CDN - Update: 28-July-2016 ↗
Saturday' 13-Mar-2021
The TOFFEE Project website is hosted on Inmotion Hosting. And so I am looking for alternate hosting provider to build my first CDN node. My plan is to make multiple sub-domains of my website such as cdn1.the-toffee-project.org, cdn2.the-toffee-project.org and point each of this corresponding subdomain(s) to various alternative web hosting servers geographically spread across the world. Sometimes choosing the same vendor for multiple CDN nodes may result multiple servers existing in the data-center. And this becomes an issue if there is some catastrophic network disaster.
Featured Educational Video:
Watch on Youtube - [4693//1] 238 Opening Western Digital WD My Passport Essential 320GB WD3200MEW-00 - 2008 USB Drive ↗

iPerf Network Optimization - WAN Optimization Demo ↗
Saturday' 13-Mar-2021
Building my own CDN - Finally Completed - Update: 17-Dec-2017 ↗
Saturday' 13-Mar-2021
Today I finally completed building my own private CDN. As I discussed so far in my earlier topics (Building my own CDN), I want to custom build the same step-by-step from scratch. And I don't want to for now use/buy third-party CDN subscriptions from Akamai, CloudFlare, Limelight, etc as I discussed earlier.