One of the suggestions Google PageSpeed Insights tool suggested for The TOFFEE Project website is to minify the css and java script files (as discussed in my earlier update on 22-July-2016. You can read the same HERE).

Minify Script files: When you read online about minification of your web script files, often they highlight file size savings and thus resulting faster download time and better website performance. This is true to an extent. But these days we get faster networks and the websites are already getting bulky loaded with lots of image files. So saving few kilobytes by minification of these script files sometimes hardly matter. But being myself a systems architect I can see there are other advantages in a systems point of view.

Assume users are accessing your website(s) via Mobile devices and mini-PC hardware platforms. In these cases the CPU and memory resources in these devices are limited. In that case the scripting language interpreters such as Javascript/CSS/HTML (existing within your browsers) will have less preprocessing work to do if the script files are minified. When these interpreters parse a text based script file it needs to skip comments and various white spaces. This causes unwanted CPU overhead. So minified script files are lot more interpreter parser optimized. In other words, if you minify php files, you server (such as your Apache web-server in your hosting site) processing overhead will reduce, if you minify Javascripts, CSS, HTML your client (Browser) processing overhead will reduce.

In the case of C/C++ programs, programmers compile and generate machine readable binary output in offline. This is a passive operation where a developer builds and publishes/releases his compiled binaries. But in the case of script files, the interpreters have to parse these files in real-time and this is a CPU bound operation in real-time. And hence it makes sense to minify the script files.

Here is my Joomla protostar template main css file. As you can see below this is neatly formatted and human readable. But for the reasons discussed above, this needs minification.

To minify the same, I can use various online tools. But there is a risk in using the same sometimes. Since there are various levels of minification one can do. Such as removal of comments, removal of white spaces and as well refinements in code so that it can produce the same browsing experience. Since this file is a very large file I decided to manually minify the same. And I am afraid using online tools as they may introduce any bugs into the same.

So I started manually minify the same in various stages. I can maintain several snapshots (versions of the script file) so that if something goes wrong I can safely roll back to a previous version which is working flawless.

And here is the screenshot of the original Joomla protostar template css file which is around 7500 lines.

So I am sure minification of these script files will boost my run-time website performance. As I explained before I am not bothered about the file download time, but instead I want to optimize its real-time rendering performance in a browser. This is my next yet another baby step towards building my own private CDN Network.

Here is my live video log of the same:

Network Latency in WAN Networks and performance optimization ↗
Saturday' 13-Mar-2021
Here is my video article on Network Latency in WAN Networks (such as long distance Satellite links, etc) and how you can optimize the same to achieve better network performance.
Building my own CDN - Finally Completed - Update: 17-Dec-2017 ↗
Saturday' 13-Mar-2021
Today I finally completed building my own private CDN. As I discussed so far in my earlier topics (Building my own CDN), I want to custom build the same step-by-step from scratch. And I don't want to for now use/buy third-party CDN subscriptions from Akamai, CloudFlare, Limelight, etc as I discussed earlier.

Riverbed and Silver Peak WAN Optimization vs TOFFEE-DataCenter (TOFFEE and or TrafficSqueezer) - FAQ ↗
Saturday' 13-Mar-2021
CDN Content Delivery Networks - Types ↗
Saturday' 13-Mar-2021
Building my own CDN - Moving away from Joomla to non-Joomla website - Update: 01-Oct-2016 ↗
Saturday' 13-Mar-2021
Seems there are couple of Inmotionhosting servers are down. And one of the server includes The TOFFEE Project website hosted server. I was in touch with the Inmotionhosting team trying to resolve the same. I found a unique issue that all my website files are intact and the Joomla database. But the Joomla database tables are completely wiped out and missing. Besides there is also a sort of upgrade going on in their servers. Luckily I have the most recent backup of the entire website.
在YouTube上观看 - [1795//1] Deep Space Communication - Episode1 - Introduction ↗ 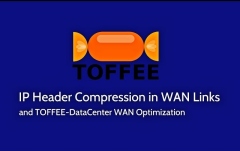 TOFFEE-Mocha WAN Emulation software development - Update: 1-July-2016 ↗
Saturday' 13-Mar-2021
Today I got a feature request from Jonathan Withers. Jonathan is from a company called MultiWave Australia. He said he is able to get the TOFFEE-Mocha Raspberry Pi setup up and with that he is able to emulate geostationary satellite link. But he requested me is there a way to extend the constant packet delay from 40mS to 500mS. So as a part of his request I supported the same in the current ongoing development version of TOFFEE-Mocha.
Research :: Optimization of network data (WAN Optimization) at various levels: